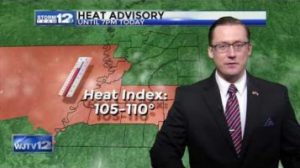 Brad Maushart, weekend weather guesser for  Nexstar’s WISH in Indianapolis, IN is headed back to Cincinnati after spending just under two years in Indy.

Maushart spent six months as a freelance meteorologist for Scripps’ WCPO in Cincinnati during his short Indianapolis tenure, shuttling back and forth during that time.

But when he moves at the end of this month, he’ll be heading to Sinclair’s WKRC in the Queen City.

Prior to Indianapolis he was at Nexstar’s WJTV in Jackson, MI for three years.