You’ll just have to be patient to hear about her next move, but after ten years, CNN tech correspondent Laurie Segall has packed it in.

“Some personal news… my documentary on Facebook airing this weekend will be my last project at CNN. Officially leaving the company… more soon on my next moves. It’s been a wild 10 years 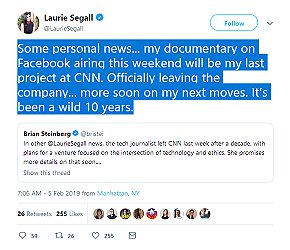 We’re told her next project will have something to do with the “intersection of technology and ethics.”

As her parting gift to CNN, she leaves behind a documentary on Facebook’s first 15 years.

Talk about the lack of that technology/ethics intersection.

It airs this Saturday.