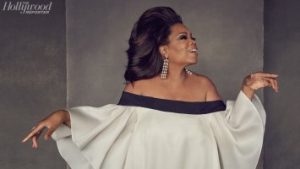 With the strains of “I’ve Gotta Be Me” undoubtedly playing softly in the background, Oprah Winfrey offers up her reasons for departing “60 Minutes.”

She just couldn’t be herself.

In a new interview with The Hollywood Reporter, the media mogul revealed she left the CBS news program because it wasn’t a good fit.

“How should I say this?” she responded when asked why. “Never a good thing when I have to practice saying my name and have to be told that I have too much emotion in my name.”

Or maybe it’s because her primary concern at the moment is advising long-time pal Gayle King how to extract every last possible dollar out of CBS in her contract talks aimed at remaining on “CBS This Morning.”

Better listen Gayle – the woman has experience in these matters.