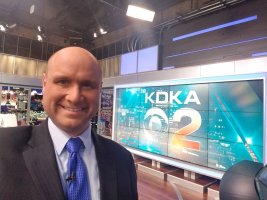 After months of filling in as a freelancer following the abrupt dumping of longtime chief meteorologist Jeff Verszyla last December, Ray Petelin is no longer freelance and is now a fully-vetted staffer at CBS-owned KDKA in Pittsburgh.

His permanent slot is weekday evenings, traditionally the spot for a chief meteorologist, although KDKA has not given him that title.

So maybe consider him the chief in all but name.

It’s an ironic jump for Petelin, who spent 7 years as the weekend meteorologist across town at Hearst’s WTAE before being shown the door last September.

He wasted no time, picking up the freelance gig at KD in October.