If you bet that a decorated US Army officer, who completed multiple tours of duty in South Korea,  and Germany, and who earned a Purple Heart after being injured during a 2003 deployment to Iraq, AND who is one of the National Security Council’s top experts on the Ukraine would be immune from puerile personal attacks from the Princess of Puerile and her toxic guest panel…..

Then again, this wasn’t on an actual news program. 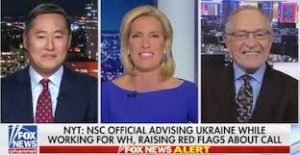 This was Laura Ingraham’s prime-time hour on Fox “News,” and why would they wait to hear the testimony before their rush to judgement?

The back story: “The New York Times” reported that the NSC’s top expert on Ukraine, Lt. Col. Alexander Vindman, repeatedly raised concerns to his superiors and NSC lawyers that US policy towards Ukraine, including Trump’s personal attorney Rudy Giuliani‘s efforts to pressure Ukraine to investigate Trump’s political rival, was undermining US national security interests.

House impeachment investigators heard from Vindman Tuesday about his concerns.
“I am a patriot, and it is my sacred duty and honor to advance and defend our country, irrespective of party or politics,” Vindman said in his opening statement. “I did not think it was proper to demand that a foreign government investigate a U.S. citizen, and I was worried about the implications for the U.S. government’s support of Ukraine. I realized that if Ukraine pursued an investigation into the Bidens and Burisma it would likely be interpreted as a partisan play.”

And, as a guy whose family fled the Soviet Union when he was three, he should know sketchy political behavior from the lessons he learned from his family’s ordeal.

It was that thin thread which Ingraham and her guests grabbed at to attack Vindman.

Former Bush administration lawyer/torture memo author and conservative commentator John Yoo even went as far to accuse Vindman of possible spying for Ukraine, saying, “I find that astounding and some people might call that espionage, but it doesn’t add any enough facts to what we know.”

As usual, the panel offered not one shred of evidence to back up their insinuations and accusations.

Characteristically, the other cable networks pounced on the segment.

CNN’s John Berman rolled the clip for the “New Day” audience Tuesday and cautioned “viewer discretion” because, he said, it was “disgusting.”

Uncharacteristically, the normally voluble Fox PR Department had nothing to say when contacted about the segment.