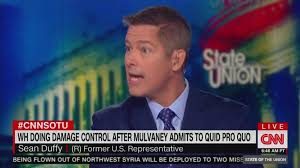 Wisconsin Republican congressman Sean Duffy as the outlet’s latest paid gasbag (a term we use no matter the affiliation of said gasbag. They’re all hot air.)

CNN’s own anchors got into the act.

For example,  anchor Brianna Keilar took aim at her colleague by calling out his “anti-immigrant bigotry” while mocking him over his reality-TV past.

In one of his early appearances this week, Duffy suggested on CNN’s “New Day” that a missing DNC server is “at the heart of the Russia investigation.”

Other CNN personalities openly slammed Duffy after he baselessly claimed House impeachment witness Lt. Col. Alexander Vindman had an “affinity for the Ukraine” due to his Ukrainian-American heritage.

“That’s a pretty stunning comment you made just there, and it’s remarkable and notable given that Laura Ingraham last night, in her apparent talking points, brought it up as well,” “New Day” co-host John Berman told Duffy immediately after he made the remark.

In an interview with “POLITICO,” CNN vice president Rebecca Kutler said the network “is out there reporting from all over the country and from all points of view” and that “having people who support the president’s policies is part of that.”

Then there is “The New Republic” article entitled “Why Did CNN Hire a Moron Like Sean Duffy?” that noted Duffy’s long, well-documented history of making inflammatory and dishonest comments.

One example offered was a network appearance in February of 2017, during which Duffy defended Trump’s Muslim ban by saying Middle Eastern terrorists are a more significant threat than white domestic terrorists because the latter commit “one-off” attacks.

As we watched Duffy and heard his takes this week, inevitably, a quote from the past came to us.

Back in 1970 (good lord, that was a long time ago!) then-President Nixon nominated southern judge G. Harrold Carswell to the Supreme Court.

It immediately faced peril because of Carswell’s history of ruling on segregation cases – and criticism that he was, at best, a mediocre judge.

Which prompted this rather dubious defense from Nebraska GOP Senator Roman Hruska: “Even if he is mediocre, there are a lot of mediocre judges and people and lawyers, and they are entitled to a little representation, aren’t they?”

It’s as if Hruska saw a trend developing.

And here we are in 2019, getting the cable news and government we evidently deserve.