A TV journalist known for his hidden-camera work told a campus audience Tuesday that true character reveals itself in those moments when we think no one is watching. 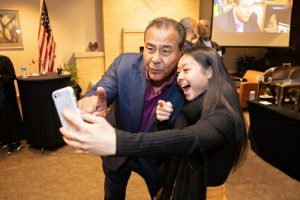 “Every day we come face to face with moral and ethical dilemmas as we go about our lives,” ABC News correspondent John Quiñones told an overflow crowd of more than 1,200 at this year’s UW–Madison Diversity Forum.

“The question is, what do you do with that opportunity to right a wrong? Do you sound an alarm and lend a helping hand, or do you just mind your own business and walk away?”

For 12 years and over the course of some 1,000 scenarios, Quiñones has captured on hidden cameras the public’s response to a variety of situations as the creator and host of the ABC television show “What Would You Do?” Time and again, Quiñones said, those who step in to aid others are often people who have been the targets of racism or discrimination or religious bigotry or bullying themselves.

“They sound the alarm because they know how painful it can be,” he said.

He urged the crowd to be active bystanders not silent observers when witnessing injustice.