President Donald Trump has nominated FCC commissioner Michael O’Rielly for a new, five-year term.  O’Reilly’s term expired at the end of June 2019, but commissioners can continue to serve until the close of the next Congress. 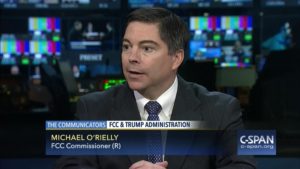 “NAB strongly supports the renomination of Mike O’Rielly to the FCC,” said National Association of Broadcasters President Gordon Smith. “Without question, Commissioner O’Rielly has served in this position with class, integrity and distinction. On a personal note, I’ve known Mike since his days as a Capitol Hill staffer, and I am so pleased with this reappointment. I urge my former colleagues in the Senate to swiftly confirm him.”
O’Rielly is a deregulatory conservative who favors lifting media ownership rules given the rise of competition from cable and broadband and satellite, and was instrumental in loosening KidVid regs on TV stations, Multichannel News reports.