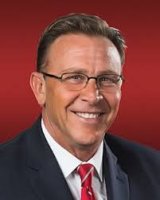 Gino Lamont started his broadcast career toting a camera for KMIR back in 1997.

In between, Lamont started on-air at the weather set on weekends.

Then he moved to mornings, launching the station’s AM offering in 1999.

“Gino is the perfect person to lead the newly combined KMIR/KVER newsroom into the future,” said Gene Steinberg SVP/General Manager at the Entravision stations.

So for his first new director job, he gets two news operations.

More News from Thursday, May 10, 2018View As Newsletter