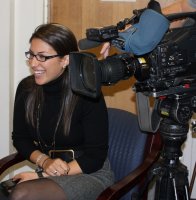 Stacey Klein, who has covered the White House beat for the past seven years for NBC News, will now coordinate the division’s efforts at 1600 Pennsylvania Avenue as the new senior White House producer based in DC.

Klein takes over for Alicia Jennings, who, after 15 years of White House coverage, will become an NBC News general assignment producer.

In the meantime, she will assist the White House team with the transition.

More News from Tuesday, May 22, 2018View As Newsletter