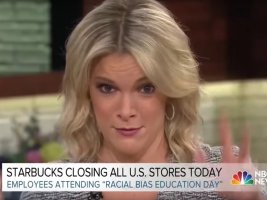 As the better part of the Starbucks workforce across the country took half a day off yesterday for sensitivity training, Megyn Kelly aired her reservations.

Kelly isn’t a fan of Starbucks new policy allowing people who don’t purchase products to use the restroom.

“They’re allowing anyone to stay and use the bathroom even if they don’t buy anything, which has a lot of Starbucks customers saying, ‘Really?’” Kelly said, while failing to cite even a single Starbucks customer who fell into her newly-created victim category.

In a panel discussion with NBC News correspondents Stephanie Gosk and Jenna Bush Hager, and conservative host of PBS’s “In Principle”, Amy Holmes. “Now the Starbucks are going to get overwhelmed with people and is it really just a public space or is it not?”

Starbucks day of sensitivity training was triggered by an April incident at a Starbucks in Philadelphia when the store’s manager called police on two African-American men who were waiting for a friend.

Police arrested the duo for trespassing; but they were later let go without charges.

Kelly seemed to graciously (for her) concede that the men probably shouldn’t have been arrested, and she had no problem with the anti-bias training itself.

Holmes agreed, saying “Starbucks may become a magnet for people who want to exploit and take advantage of this new policy.”

Bush Hager disagreed, saying “some of these people don’t have places to go…Of course it’s not a solution, but it’s also compassionate, it’s also showing kindness to people who may not have that,” a comment which garnered applause from the in-studio audience.

More News from Wednesday, May 30, 2018View As Newsletter