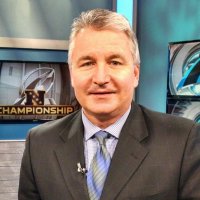 Sources told us over the weekend that Chuck Howard, who was hired in September 2016 as sports director at Fox-owned WJZY in Charlotte, NC, was shown the door under what were described as “interesting circumstances.”

And late in the weekend, we found out what happened.

Howard was fired Thursday, after he was interviewed by the station’s human resources department May 14 after an incident involving a female co-worker.

Howard said that two weeks ago he grabbed the co-worker by the lapel of her jacket.

“I said something to the effect of, ‘Let’s go have a great show tonight,'” Howard said. “It was not a violent act whatsoever.”

Howard compared it to shaking someone’s hand or patting them on the back.

An investigation ensued with an inevitable outcome.

The last time Howard was fired, by WCNC in 2006 after a mild expletive he uttered accidentally ended up on air, he was off regular television appearances for ten years.

“I’m simply flabbergasted and I must say heartbroken at the same time,” he said.