We agree with the Lost Ogle blog – there is only so much time you can spend with “family and friends” before it becomes, first, distracting; second, enervating and finally, somewhat maddening.

Especially if it’s in Tulsa. 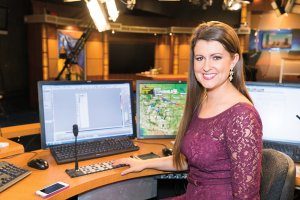 So a year after Griffin’s KWTV milked her departure from Oklahoma City for all it was worth, it is welcoming morning meteorologist Lacey Swope back into the fold.

And, how coincidental that the woman who replaced her a year ago – Robyn King – has vanished into the ether.

We do love this quote from the boss’ email to the troops announcing the prodigal’s return:
Lacey moved to Tulsa a year ago to live closer to family and her hometown. She formed a strong bond with the News on 6 team and KOTV viewers.

But over time, Lacey and her husband, Tyler, discovered how deep their roots had grown in Oklahoma City. They realized they could have quality time with family in eastern Oklahoma, while living here — the place that had ultimately become “home” for them.

The person who stands in front of maps for a living evidently can’t actually read one?

The absence of ratings, that is, which is the likely reason for this miraculous return.