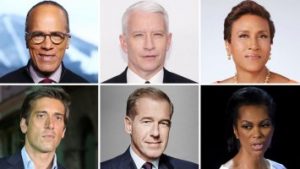 Small hint….CNN’s Anderson Cooper is the ONLY cable news anchor to show up in the top five.

He came in second and was followed by ABC’s David Muir and Robin Roberts.

And the winner is……NBC’s Lester Holt.

The results came from a new “Hollywood Reporter/Morning Consult” survey of about 2,200 adults

And while Cooper was the sole cable news rep in the top rank, the lower rungs were filled with cable news types deemed most untrustworthy.

And Jeff Glor was nowhere to be seen.