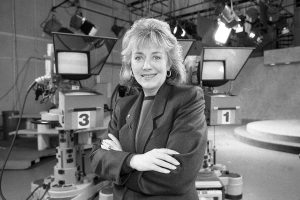 KRON (MyNetworkTV) hired Chase away from ABC News’ “20/20” in 1985, a move that attracted national attention. She headed back east in 1990, but not before winning a Peabody Award for her hour-long documentary here on the plight of homeless children. She returned to the Bay Area after her retirement in the early 2000s.

“She was remarkably talented and extremely generous,” recalled Tom DeVries, a retired television reporter who worked with Chase at KRON and remained friends with her in the decades that followed. “She could easily have been a bigfoot, but she wasn’t.”

Born in Minnesota, Chase moved to California to attend UCLA. She majored in English and then worked in politics and state government before getting a broadcasting job in Los Angeles.

She joined the staff of CBS News in New York in 1971 and moved to ABC a few years later.

She received a range of broadcasting rewards and was dubbed “the most trusted woman on TV” by TV Guide. During her time at “20/20,” a survey by the magazine also pegged Chase as the top investigative reporter on any of the national newsmagazines.

Per Chase’s request, no memorial service will be held, a family member said.