WRAL (CBS) chief meteorologist Greg Fishel no longer has a job, the station announced in an on-air statement Wednesday evening. The company cited a “personnel matter” as the reason for Fishel’s departure. 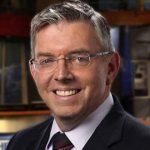 The statement was read by anchor Debra Morgan at the end of Wednesday’s 6 p.m. newscast.

“We have a difficult announcement to share with you tonight, involving a longtime member of our WRAL family. We need to let you know that chief meteorologist Greg Fishel is no longer with the company due to a personnel matter. Greg has asked that we share a written statement with you and you can find that in its entirety on wral.com.”

Fishel’s statement cited “personal challenges over the last year,” which he says have impacted his “ability to work effectively and professionally” according to the News and Observer which broke the story.