Speaking of stepping down, changes in New Orleans this week. 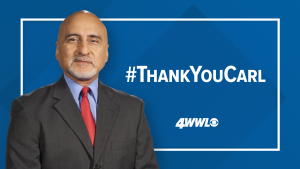 He’s battling a disease that is taking his eyesight.

A key factor in Arredondo’s decision to step down was failing vision due to a degenerative eye disorder called Retinitis Pigmentosa.

His condition has worsened in the past two or three years to the point where Arrendondo said he was concerned it might eventually interfere with the precision of his forecasts.

According to WWL’s website, “For nearly 30 years, and through some of our most difficult times, such as Hurricanes Katrina and Andrew, meteorologist Carl Arredondo has been our guide and the eyes into our future. But quietly behind the scenes, he’s been going through a storm of his own.”

You can watch the story here.

“No one knows more about New Orleans weather, and no one is more committed to keeping our audience prepared than Carl,” WWL’s News Director Keith Esparros said.

“The fact that he would walk away from his career because he feels he may soon be unable to live up to his own high standards is a testament to his integrity and professionalism.”

55-year-old Arredondo grew up in Texas and first became interested in the meteorology when a TV weatherman delivered a career-day speech at his San Antonio junior high school. He went on to study meteorology at the University of St. Thomas in Houston.

After short stints at TV stations in Brownsville, Corpus Christi and Laredo, Texas, Arredondo in 1988 took a job in Atlanta with The Weather Channel.

He moved to WWL in 1991 and was named the station’s chief meteorologist in 1998.