A young political reporter, who’s both reported and made the news, got a big surprise Thursday during a visit to the University of North Texas. 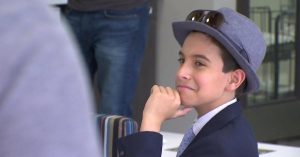 During a tour of the journalism department at the University of North Texas on Thursday, he was surprised with a $5,000 scholarship from UNT’s Mayborn School of Journalism.

Legg has already covered plenty of big stories. It all started in 2016, while watching coverage of a presidential race that’s still being covered daily.

Legg said he was perplexed by what appeared to him as uneven media coverage, especially by major cable TV networks.

In 2016, the home-schooled student from Cedar Hills convinced his dad to travel the country in search of stories, told through his perspective.

Whether he’ll pursue a career in journalism remains to be seen.

Legg said he’s blessed to have the opportunity.

KXAS (NBC) put together a piece on Legg, you can watch it here.