If you have paid attention to the Houston Texas market, say since 1964, then you’ve heard the name Dave Ward. 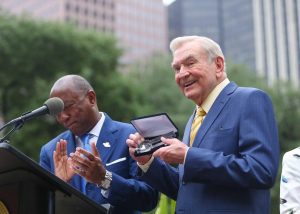 Dave Ward’s new book “Good Evening, Friends: A Broadcaster Shares His Life” begins with a close call — a heart attack that nearly ended his life story before he put it down on paper.

He then recounts his journey in which he refers to himself as an “accidental anchor” at KTRK (ABC). By the end of the book, he’s recognized by the Guinness Book of Records for his 49 years and 218 days as a television-news broadcaster, dating to late 1966.

On Monday, Ward turned 80, and he does so while celebrating the publication of his book, which charts his path from the son of a preacher to a radio newsman to one of the most recognizable faces in Houston.

Ward is fairly matter-of-fact about it all. “I’m still kicking after 80 years,” he says. “So I’m very blessed.”

You can find his book on Amazon.com and beyond.

More News from Tuesday, May 7, 2019View As Newsletter