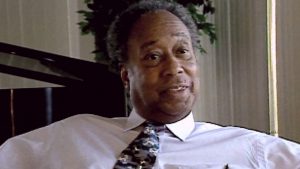 Ewing had a knack for talking with crime suspects and nearly 100 surrendered to him over a decades-long career at WMAQ (NBC) and WLS (ABC).

Some sought to clear their names, others to atone or just get it over with.

Many also wanted to avoid a bruising capture by law enforcement by having him film them unharmed before escorting them to the police, according to Eugene Stanback, his frequent camera operator.

In 1995, when he retired after 14 years at ABC 7 and 15 years before that at NBC 5 — he’d been recognized with nine Emmys, a Chicago Headline Club Peter Lisagor Award for Exemplary Journalism, two “medals of merit” from the city of Chicago and a Sun-Times editorial lauding his “courage and diplomatic skill” in persuading holdup suspects to give up their hostages.

The Chicago Sun-Times reports 95-year-old Ewing died Tuesday at his home in Paw Paw, Michigan, according to friends.

He found out in October he had bladder cancer, according to Patricia L. Arnold, who produced many of his broadcasts for WLS (ABC).