Demetria Obilor’s tenure as traffic reporter for WFAA’s (ABC) Daybreak will be ending after October, according to a memo from station manager Carolyn Mungo that has been obtained by unclebarky.com. 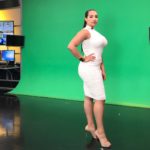 Her surprise decision apparently is linked in part to a tiff this week with colleagues on the early morning Daybreak show.

Stating that she has “big news to report,” Mungo told staffers that Obilor has “decided to step away from the traffic desk and not renew her contract at WFAA.

As we all know, Demetria took DFW by storm almost immediately after her arrival. Her authenticity during a video response to viewer body shaming went viral. It solidified the fact that Demetria is her own person! And people watched.”

Things came to a head when  a Twitter video posted by co-news anchor Marc Istook, who decided to school Daybreak colleague Hannah VanHuss Davis on the art of cooking steaks.

While they were shown in closeup, Obilor intermittently could be seen sitting in the background, seemingly oblivious to it all while either staring straight ahead or on her cell phone.

Despite apologies over social media , this showed up online. 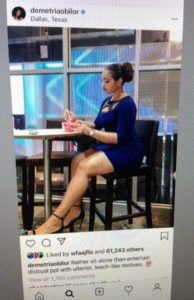 According to several sources, the above post was not at all welcomed by TEGNA corporate, which owns WFAA8. “Authenticity” only goes so far, particularly when it’s aimed at co-workers on a public social media page. But the tension had been brewing well before this week’s social media boiling point, sources say.

Obilor will be the second major player to depart Daybreak this year. Co-news anchor Ron Corning left the program in March to pursue other opportunities after eight years on the early morning shift.