MSNBC host Chris Matthews probably won’t be back on the air for a while, but it’s safe to say his prognosis after prostate cancer surgery is excellent, reports The Philadelphia Inquirer. 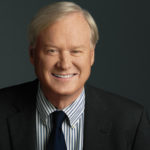 Matthews’ temporary replacement, Steve Kornacki, revealed on Monday night’s episode of Hardball that “Chris is recovering from prostate cancer surgery last week. The procedure went well, but he’s taking a few days to get back into fighting shape.”

It might take more than a few. Most men take six to eight weeks to recover from “radical prostatectomy” — the removal of the prostate gland, said Alex Kutikov, a urologic oncologist at Fox Chase Cancer Center.

Even though surgery is now usually done minimally invasively with a robot system, it is a big operation.

Details of Matthews’ diagnosis have not been released, but at 73, the outspoken commentator is beyond the age that expert guidelines recommend routine prostate cancer screening with the PSA blood test.