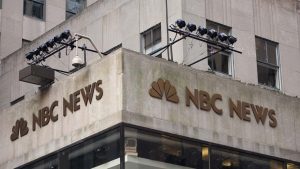 The editorial staff at NBC News Digital overwhelmingly voted 90-40 to join the NewsGuild of New York.

The landslide vote swamped a last-minute anti-union campaign that we reported about last week.

The vote was necessary because, despite a clear majority of NBC News Digital personnel signing union authorization cards in October, the company refused to voluntarily recognize the union.

The union push came with advocates citing a desire to push their employer to work more seriously through such issues as equal pay and the recent handling of sensitive stories.

“Our mission is to uphold the legacy of NBC News while empowering and protecting those who will build its future,” the new union said in a statement.

“I have heard from many of you over the past several weeks about your love for NBC News, your excitement for all that we are building in Digital, and your commitment to making sure this continues to be a very special place to work,” said Chris Berend, executive vice president of NBC News Digital, said in a memo to staffers Friday. “Our leadership team makes that same commitment back to you— that News Digital will continue to nurture a workplace that we can all be incredibly proud to be a part of.”

And so, for now, peace on earth, good will toward men.