Not too long after Fox News personality Geraldo Rivera tore into “Fox & Friends” co-host Brian Kilmeade early Friday morning over his support of the drone strike that eliminated Iranian general Qasem Soleimani, the mustachioed trash-talker apologized, after which the two returned to arguing as usual, hilariously enough, reports Bizpac Review.

“First, let me say that I love you, I admire you, I have tremendous respect for you,” his remorseful apology began later that morning on Fox News Radio’s “The Brian Kilmeade Show.”

He then explained how his wife had convinced him that it wasn’t proper for him to yell at Kilmeade the way normal Americans yell at CNN’s Jim Acosta:

“My wife, Erica, called and said I was mean in speaking with you on ‘Fox & Friends.’ And she said the first thing you do when you talk to Brian or you see him next is apologize.” 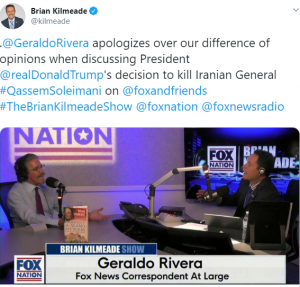 Next came the actual apology.

In short, while he still maintains his opposition to President Donald Trump’s elimination of Soleimani, he admits that his disagreement in opinion with Kilmeade didn’t warrant him acting like angry climate change zealot Greta Thunberg.