Overall, Republicans and Republican-leaning independents view many heavily relied on sources across a range of platforms as untrustworthy. At the same time, Democrats and independents who lean Democratic see most of those sources as credible and rely on them to a far greater degree, according to the survey of 12,043 U.S. adults conducted Oct. 29–Nov. 11, 2019, on Pew Research Center’s American Trends Panel. 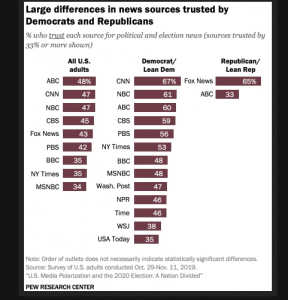 These divides are even more pronounced between conservative Republicans and liberal Democrats.

Moreover, evidence suggests that partisan polarization in the use and trust of media sources has widened in the past five years. A comparison to a similar study by the Center of web-using U.S. adults in 2014 finds that Republicans have grown increasingly alienated from most of the more established sources, while Democrats’ confidence in them remains stable, and in some cases, has strengthened.

The study asked about use of, trust in, and distrust of 30 different news sources for political and election news. While it is impossible to represent the entire crowded media space, the outlets, which range from network television news to Rush Limbaugh to the New York Times to the Washington Examiner to HuffPost, were selected to represent popular media brands across a range of platforms.

Greater portions of Republicans express distrust than express trust of 20 of the 30 sources asked about. Only seven outlets generate more trust than distrust among Republicans – including Fox News and the talk radio programs of hosts Sean Hannity and Rush Limbaugh.

For Democrats, the numbers are almost reversed. Greater portions of Democrats express trust than express distrust in 22 of the 30 sources asked about. Only eight generate more distrust than trust – including Fox News, Sean Hannity and Rush Limbaugh.