It was horrifying enough back in August of 2015 to endless replays of the on-air murder of reporter Allison Parker.

To have it ghoulishly live on with YouTube videos and other online outfits is ghastly.

And Parker’s father wants the FTC to do something about it.

Andy Parker has filed a complaint with the FTC for the way YouTube mishandled and misrepresented the process of getting videos of his daughter’s murder scrubbed from the platform. 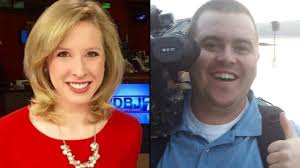 You will remember that Alison Parker was murdered on live television, along with her cameraman, Adam Ward while they were doing a live shot for Roanoke tv station WDBJ.

Video from the broadcast, as well as video from a GoPro worn by the gunman, have been shared across YouTube thousands of times, by conspiracy theorists and users who want to draw views with the shocking, gruesome footage.

In his FTC complaint, Parker claims that the way the platform has handled videos of his daughter’s death—and many other videos of brutal shootings and murders—deceives consumers.

Despite these videos clearly being against YouTube’s community guidelines, which forbids images of graphic violence and death, many of these videos remain up on YouTube for years.

The complaint alleges that YouTube misrepresents how much violent content is on the site, and fails to tell users that the responsibility to get videos of victims’ deaths taken down is on them—and most often, on the families of the victims themselves.

Even when someone goes through the long, painstaking process of finding and reporting one of these videos, YouTube often doesn’t even remove the video.

The filing calls these practices “deceptively burdensome” and that the site “utterly fails” to follow through on promises to take down content in clear violation of its own terms of use.