Austin-based conspiracy theorist and Info-Wars radio host Alex Jones was booked into the Travis County Jail on a charge of driving while intoxicated just after midnight Tuesday, the Austin Statesman reports. 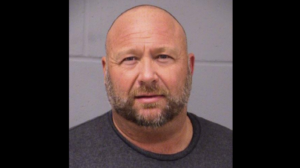 Jones, 46, was booked at 12:37 a.m. on a driving while intoxicated charge is a class B misdemeanor, she said.

An arrest affidavit for Jones says a sheriff’s deputy responded at 10:10 p.m. Monday to a western Travis County residence for a disturbance reported by Jones’ wife.

While en route to the residence, a deputy saw a dark Dodge leaving the neighborhood. The vehicle was traveling 45 mph in a 40 mph zone.

The deputy pulled the vehicle over and interviewed Jones, who had a strong odor of alcohol, the affidavit says.

Jones told the deputy he and his wife had gotten into an argument while eating sushi at Izumi Sushi around 8 p.m., the affidavit says. He said he drank a bottle of sake during dinner, according to the court documents.