NBCUniversal Owned Television Stations, a division of NBCUniversal, has promoted Chris Wayland to President and General Manager of NBC10 Boston/WBTS, Telemundo Boston/WNEU and regional cable network NECN, effective immediately. In his new role, and as the current President/GM of NBC Sports Boston, Wayland will be responsible for overseeing all station departments across WBTS, WNEU, NECN and NBC Sports Boston.

Mike St. Peter leaves his role as President/GM of the Boston stations and NECN to take on a temporary corporate level position that will support the division’s news operations. Both Wayland and St. Peter will report to Valari Staab, President of NBCUniversal Owned Television Stations. As President/GM of NBC Sports Boston, Wayland will continue to report to Ted Griggs, President, Group Leader and Strategic Production and Programming, NBC Sports Regional Networks

“Chris is a great leader who’s worked very hard to earn the trust of our Boston staff in a very short amount of time. I look forward to the new milestones he and our Boston teams will accomplish together, building upon the great work that Mike has done for our Boston businesses,” said Staab.

In his new role, Wayland will oversee all day-to-day operations of WBTS, WNEU and NECN, after overseeing the stations’ sales, finance, marketing and digital departments for the past 13 months as Senior Vice President and General Manager. Wayland is a seasoned broadcast executive with more than two decades of experience in television. 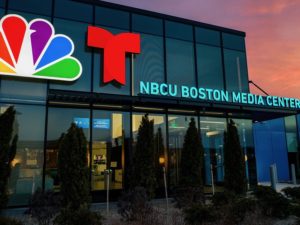 Before joining NBCUniversal in February 2019, he worked as Senior Vice President, General Manager at WPIX-TV in New York from 2016 to 2019, and at Tribune Media as Vice President of Group Operations. He also worked at Sunbeam Television from 2007 to 2016, where he held numerous roles, including Executive Vice President and General Manager of WHDH/WLVI in Boston and WSVN in Miami, and General Station Manager and General Sales Manager of WHDH in Boston. He began his career at WLVI-TV in Boston.  Staff from NBC10, NBC Sports Boston, Telemundo Boston and NECN moved into the NBCUniversal Boston Media Center earlier this year. The multi-million dollar, 160,000 square-foot facility represents the largest investment ever made by a media company in the Greater Boston Area, and combines four stations under one roof.