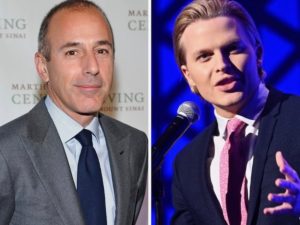 Matt Lauer published a lengthy op-ed in Mediaite attacking Ronan Farrow for the reporting in his book Catch and Kill, where he writes about a former Today producer’s claim that Lauer raped her.

Lauer cites specific instances in Catch and Kill where he contends that Farrow failed to talk to people who offered contradictory information to Brooke Nevils’ claims.

Lauer wrote, “I believe Ronan knew his work on Catch and Kill would receive little in the way of scrutiny, from the very beginning. It’s the only way to explain why he was so willing to abandon common sense and true fact checking in favor of salacious, and deeply flawed, material. I also believe that some of Ronan’s sources felt they could make outrageous claims to him, knowing he (and thus their stories) would not be doubted.”

Farrow responded on Twitter on Tuesday, “All I’ll say on this is that Matt Lauer is just wrong. Catch and Kill was thoroughly reported and fact-checked, including with Matt Lauer himself.”

More News from Wednesday, May 20, 2020View As Newsletter