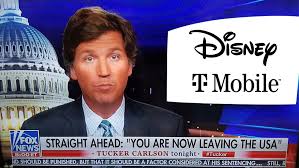 On the heels of Disney and T-Mobile separating themselves from Tucker Carlson‘s Fox News show because of his views on the Black Lives Matter movement, others are allegedly following suit.

“This may be a lot of things, this moment we are living through,” Mr. Carlson said. “But it is definitely not about black lives, and remember that when they come for you. And at this rate, they will.”

Since that on-the-air quote, according to the New York Times, Papa John’s and Poshmark have joined Disney and T-Mobile, distancing themselves from “Tucker Carlson Tonight,” joining other businesses that have backed away from the show in recent years

The flight of advertisers accelerated when the watchdog group Sleeping Giants tagged T-Mobile in a Twitter post, saying that Fox News had aired what amounted to an “extremely racist segment scaremongering about the Black community.”

The telecommunications giant responded on Twitter, saying that its ads had not run on the show since early May and would not run in the future. Mike Sievert, T-Mobile’s chief executive, added a post of his own: “Bye-bye, Tucker Carlson!”

Fox News said that Mr. Carlson was referring to Democratic leaders, not protesters, when he said “they” in his remarks.

“No matter what they tell you, it has very little to do with black lives,” Mr. Carlson had said. “If only it did.”