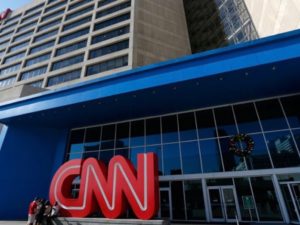 While CNN‘s New York City headquarters is the home-away-from-home for many more CNN employees as well as the shooting location for Anderson Cooper, Don Lemon, Erin Burnett, Chris Cuomo and many more, Atlanta has always been the “home” of CNN.

But according to Deadline, WarnerMedia plans to sell the historic CNN Center in downtown Atlanta — the building attacked last month during a wave of protests — as parent AT&T looks to shed assets to help pare down its massive debt.

Plans to unload the property following the AT&T-Time Warner merger had been put on hold but resurfaced Monday in memo to CNN staffers. It’s a time of new ownerships and real estate shifts in the media world, with ViacomCBS also in the market to sell off the fabled CBS Black Rock building in New York City.

“We are consolidating our WarnerMedia Atlanta operations in our recently renovated and redesigned Techwood campus. This will increase collaboration and optimize use of Techwood, which was created to be a state-of-the-art hub for our diverse business portfolio. As part of these changes we are selling the CNN Center, which is a retail center, well positioned in the downtown entertainment area of the city. Once sold, we will lease back the property for a minimum of five years. There will be no immediate impact to employees working at the CNN Center,” WarnerMedia said in a statement.

“Now that we’ve had time to further evaluate, we’ve concluded that the best course of action is to sell the CNN Center,” the company said in a memo to employees. It will centralize most employees at its location in Techwood complex, also in Atlanta. It said the transition process would be “lengthy.”