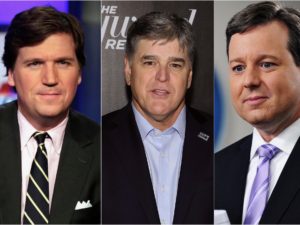 When do a few occurrences become a pattern and when does that pattern become an epidemic?

According to Deadline, Tucker Carlson is returning to Fox News Channel tonight after a short vacation, but along with the cabler newser itself, Sean Hannity and the now fired Ed Henry, the top rated host also finds himself in the center of a whole new legal spotlight of alleged misconduct at the now Suzanne Scott and Jay Wallace-run outlet.

“It is widely documented in the public record that Fox News has not only cultivated and fostered sexual harassment and misconduct, but has consistently accepted and rewarded it,” says a sex trafficking, sexual harassment, gender discrimination and retaliation lawsuit from former Fox Business Network associate producer Jennifer Eckhart and former FNC guest Cathy Areu filed today against the Rupert Murdoch-owned outlet, its former reporter and some of its biggest and loudest primetime hosts.

“Nevertheless, Fox News would have the public believe that it is a different place from the Fox News that was run by former disgraced Chairman and CEO Roger Ailes,” the jury trial action adds, noting the many accusations against the axed and now deceased former Mike Douglas Show producer.

“Unfortunately, it is actually worse,” the extremely detailed suit filed in federal court in New York asserts (READ IT HERE).

“As described in detail herein, Fox News continues to protect and reward perpetrators of sexual harassment and refuses to take accountability for putting such persons in positions of power from which they can subject women to sexual misconduct, sexual assault and, in the case of Ms. Eckhart, rape,” the injunction and wide-spread damages seeking suit states. “Some of the names in leadership may have changed since Roger Ailes’ regime, but Fox News’ institutional apathy towards sexual misconduct has not.”

“Based on the findings of a comprehensive independent investigation conducted by an outside law firm, including interviews with numerous eyewitnesses, we have determined that all of Cathy Areu’s claims against FOX News, including its management as well as its hosts Tucker Carlson, Sean Hannity & Howard Kurtz and its contributor Gianno Caldwell, are false, patently frivolous and utterly devoid of any merit,” said a Fox News spokesperson on Monday of the lawsuit, which also names MediaBuzz host Kurtz as a defendant. ”

While only Henry is named in the sex trafficking claim, the complaint paints a damning portrait of the way things are still supposedly done at FNC.

America’s Newsroom anchor Henry was fired by FNC brass on July 1 after reports of “willful sexual misconduct in the workplace years ago” were supposedly brought to their attention on June 25 by “a former employee’s attorney.” That former employee in question was Jennifer Eckhart.