Skip to content
It’s not the first time in history that a President has made a promise that was not only broken, but had come back to haunt him. 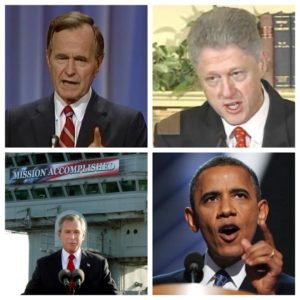 “Read my lips, no new taxes,” said George H. W. Bush.
“I did not have sex with that woman,” Bill Clinton assurered the American people.
“Mission Accomplished” read the banner behind Dubya.
“If you like your health care plan, you can keep it.” promised Barack Obama.
Herman Cain ran for president, as a republican, in 2012. He died yesterday due to complications from coronavirus. An early Trump supporter, ten days prior to his positive test results, he’d attended President Trump’s now infamous Tulsa, Oklahoma indoor rally, in which masks were not required.  Some wore them anyway.  Cain did not.
It’s hard to gauge how many other people who believe in Trump’s messaging were at the rally and may have caught coronavirus.  We don’t even know if that’s where Cain caught it. But these things we do know – President Trump said the following things and many more: 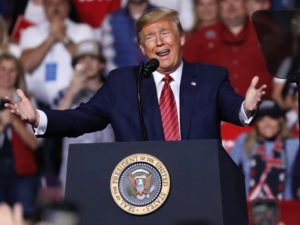 So what’s the difference between “The coronavirus is very much under control in the USA” and “I did not have sex with that woman”? One is a politician being a politician.  The other can literally kill you.
On March 31 of this year, CNN and MSNBC made a paramount decision. In the opinion of the powers-that-be at the two cable networks, the misinformation and/or irrelevant information (basically, campaigning) at the “coronavirus briefings” became so great, that they pulled the plug on the president.  MSNBC cut away from him.  CNN tuned in for Dr. Anthony Fauci.
People are dying.  The president of the United States is touting a doctor who is plugging hydroxychloroquine to treat coronavirus.  The doctor he found to concur with his hydroxy-plug also believes:
*She is accepting new patients by the way.
So who is culpable, if anyone?  Does Donald Trump bear any responsibility to MAGA nation, who by his own admission would stay with him even if he shot someone on 5th Avenue.  Some are injecting bleach.  Some are attending indoor rallies without masks.  Some, like the guy that works at my fish store, think it’s all a hoax.  Why? Because that’s what he said.   When do his words become so egregious and ludicrous that entities that consider themselves “news” have to pull the plug on him, as CNN and MSNBC did? When do the words of the president threaten the very health of their viewers?
We asked one local news director, who preferred to remain anonymous, but who was adamant in his answer, “Never.  It’s not even a question. He can literally look into the camera and say ‘drink bleach to prevent it’ and we’re airing it. It’s not worth the outrage of 50% of the audience by censoring him.”
So there you have it.  He can shoot someone on 5th Avenue and not lose a supporter.  I even know of one news director who would be glad to film it.