Just a few months after getting the main meteorologist gig in Austin, Texas at KXAN, David Yeomans got a really cool opp with GQ. 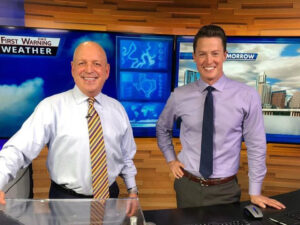 Yeomans made a cameo in one of the men’s magazine’s video diaries.

It’s called The Breakdown and he literately broke down the likelihood of whether or not weather events that appear Hollywood movies would happen in real life. Including one of his favorites (and the one that got him into meteorology) Twister.

“This got a whole generation of people into the weather, including me,” he says in The Breakdown. “There’s a very realistic tornado, some debris spinning around on the ground or whatever else is chewed up by the tornado, and the condensation funnel is basically the tornado itself.”

Yeomans took over for Jim Spenser, who retired as chief.

You can see the video below. FYI – it’s not a regular gig. Or at least not for now..