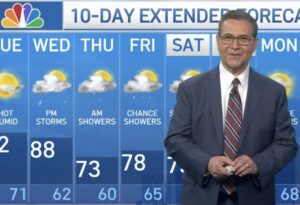 It’s been three decades and a number of stints on television… and now meteorologist Andy Avalon’s is ready to retire.

The 66-year-old is leaving WMAQ, the NBS station in Chicago, as the morning meteorologist after what will be his second stint.

In a note to the staff, he’s most excited to never set his alarm for midnight again.

His last day on the air is August 27.