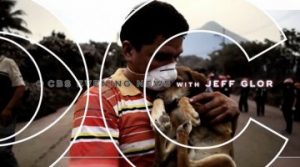 Another approach being revamped by CBS on its “Evening News” steals an idea from the network’s morning show.

Or rather, it is “borrowing” the “Eye Opener” format from the morning show so that the top of its broadcast leads with just two short teases before cutting to anchor Jeff Glor at the anchor desk with a generic “Evening News” video wall background behind him saying something to the effect of “but first a look at tonight’s headlines in 60 seconds.”

The broadcast then cuts to a tightly edited, dynamic roundup of the headline driven heavily by SOT and correspondent VOs mixed with quick cuts of video and still imagery edited to match the beat of the music.

It serves as both a roundup and teases for longer coverage of the stories later in the newscast.

And, it means less face time for Glor at the top of the newscast.

Whether by accident or design, we can’t say.