Wall-to-wall coverage of a political rally is anything but news.

And we’re not surprised that Fox News and Fox Business set up camp in Duluth, Minnesota the other night to dutifully transmit the usual mélange of rambling self-promotion, insults, one-liners, half-truths, untruths and media attacks.

Neither outlet is actually a news organization and if you disagree, you’re not paying attention.

CNN forfeited that designation back when Zucker opted for the same ploy. 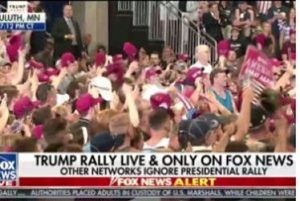 A little something extra was added this time around.

Fox blatantly called out other networks during the broadcast of the rally with a chyron that said, “Trump rally live & only on Fox News, other networks ignore presidential rally.”

Not as stupid as ABC News’ mistaken chyron earlier this week that had former Trump campaign manager Paul Manafort indicted for manslaughter.