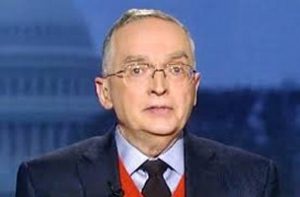 Where he once made his post-military living trashing all things Obama on Fox News, retired Lt. Col. Ralph Peters, now a FORMER Fox analyst, is making it a fulltime job to trash Fox News.

To no one’s surprise, he’s finding a comfortable pulpit on MSNBC.

In his latest broadside, Peters told host Ari Melber that Fox used to be an important and necessary outlet for conservative voices, but now it’s a “propaganda machine” full of people helping Trump’s attacks on American institutions.

Somewhere, Chris Matthews got a thrill up his leg.