A new face will soon “Wake Up Wisconsin” on Quincy Media’s WKOW in Madison, WI. 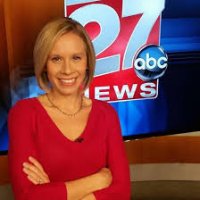 Current anchor Dani Maxwell isn’t leaving the station, but she is moving up into a management role as the new newsroom Content Manager.

She held the content manager title while serving as evening anchor at sister station WREX in Rockford, IL.

Weekend anchor Nick Buffo will take over her weekday chair beginning next Monday.