While Hannity was playing the poodle to Mr. Trump, Chris Wallace of “Fox News Sunday” was playing bulldog to Vladimir Putin in another Fox News exclusive. 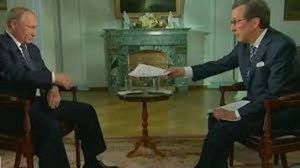 After the love-in with Mr. Trump, Putin sat down for what quickly became a contentious back and forth as Wallace pressed the Russian leader on a number of issues.

Near the beginning of their interview, Wallace presented Putin with a copy of special counsel Robert Mueller’s indictment of 12 Russian intelligence officers as part of the investigation into the hacking of a Democratic National Committee server during the 2016 presidential campaign.

“May I give this to you to look at, sir?” Wallace asked as Putin smirked.

Putin did have a comment that would likely inspire a “modern-day presidential” tweetstorm if it came from anyone but him.

When confronted with theories that Putin has something on Trump that would compel the U.S. president to deny any Russian interference in the 2016 election, Putin responded.
“I don’t want to insult President Trump when I say this, and I may come as rude, but before he announced he would run for presidency, he was of no interest for us. He was a rich person, but there are plenty of rich persons in the United States. He was in the construction business. He organized beauty pageants. It never occurred to anyone that he would run for president.”

He defended hacking the DNC by saying nothing was altered or forged – just released- which prompted a Wallace analogy
“You’re indicating that they stole real money, not counterfeit money. Are you saying it’s OK because facts that they took from the DNC, from John Podesta, it was their real emails so it’s OK to hack and spread this information out and interfere with the election?”

And finally, “Why is it that so many of the people that oppose Vladimir Putin end up dead or close to it?” Wallace pressed in one of his final questions, mentioning attacks on former spy Sergei Skripal, political opponent Boris Nemtsov and other Putin critics.

Putin refused to acknowledge the attacks as a pattern linked distinctly to him.

He really didn’t bother to answer the question.

But watch your back from here on, Mr. Wallace.