Two Anchors from the Charleston West Virginia market are cooling their high heels after an apparent feud boiled over the top recently at an event geared at all things, ending domestic violence against women. 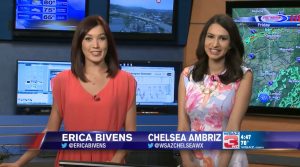 Comments to the Charleston Gazette-Mail indicate they’ve been terminated by WSAZ (NBC) although there has been no official word from the station.

Profiles for the two have also been removed.

According to comments initially posted on social media, Anchor Erica Bivens and Weather Anchor Chelsea Ambriz got into an argument which led to shoving and more.

The complaint says Bivens suffered a ruptured eardrum and skull fracture in the fight.

The two anchored the 4 PM newscast on the Gray owned station and witnesses told Police it all started over Bivens Husband who was also at the event called “Girls Night Out”.

Ambriz is set to appear in court Sept. 21.

If Ambriz is found guilty she faces up to a year in jail and/or a fine of no more than $500.

The story got worldwide coverage with all of the major Networks picking up the Charleston Newspapers story.