The Today Show has a new anchor but he didn’t travel too far for his new digs. 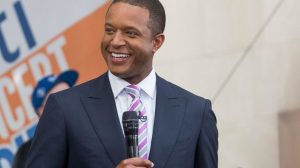 The Today Show crew announced Tuesday morning that Melvin has been named news anchor for the 7-9 a.m. weekday edition of Today where he’ll interact with Savannah Guthrie and Hoda Kotb Monday through Friday.

NBC ended up promoting Kotb to the job instead.

Melvin will continue to anchor MSNBC  during the afternoon timeslot.