According to insiders, it was business as usual Monday at KAVU (ABC) but faint whispers regarding a Texas-sized dispute that turned ugly could be heard from staffers between stories.

Peguero allegedly punched Garcia in the face while at a party Friday night in Victoria Texas. 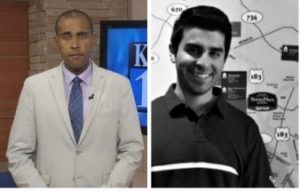 It all reportedly began when a beverage was spilled!!??

Witnesses say there was some back and forth, and Garcia tells Newsblues.com he never said his job was allegedly threatened by Peguero, as reported by tipsters. However, he did not elaborate on what led to the violence.

Victoria Police Lt. Clay Fetters told Newsblues.com, “an assault report was generated about 12 hours after the incident was alleged to have happened.” Fetters confirmed a dispute between the two.

Fetters said he was unclear if Garcia’s nose was broken, and says the information will be turned over to detectives.

So far, management has been tight-lipped.

Monday, staffers were quietly circulating a photo of “Garcia’s crooked nose” but managers did not publicly address the issue.

One employee said, “We deserve better and must do better as an industry. We are the smallest station in Texas and the station has failed to pay main anchors enough to stay around. In one year we have lost 8 newsroom employees. We only have about 12 or 13.”

Peguero started at KAVU just last week, arriving from KTXS in Abilene, TX, and was due to make his on-air appearance this week.

This is the second incident involving violence between TV news staffers in recent months.

You’ll recall we told you last month about a meteorologist at a West Virginia TV station charged after allegedly shoving a news anchor and fracturing her skull.

We’ll update details on this latest incident as they become available.