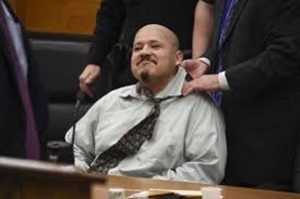 That controversial ad unveiled by the Tweeter-in-Chief last week tying cop-killer Luis Bracamontes to the migrant caravan in Mexico and then draped around the neck of the Democratic Party got an official airing last night.

The piece, which CNN turned down as “racist” and “unfit” to air on the network, showed up during “Sunday Night Football” in trimmed-down form from its original 45-second length.

The 30-second version run by NBC did not include the false claim about Democrats, but it still drew a direct connection from immigrants to crime.

The deleted portion claimed that Democrats “let him (Mr. Bracamontes) into our country” and “let him stay.”

The ad was paid for by the Trump campaign.

Running the ad was stark contrast to CNN, which publicly responded when Donald Trump Jr. criticized the network for refusing to run it.
“CNN has made it abundantly clear in its editorial coverage that this ad is racist,” the network’s public relations account posted on Twitter. “When presented with an opportunity to be paid to take a version of this ad, we declined.”

But hey, the check cleared.

BTW, the caravan was once said to have 7,000 people, but more recent estimates put the number at fewer than 3,500.