Even the folks at Tegna’s KVUE know of some stations’ revolving door reputation. 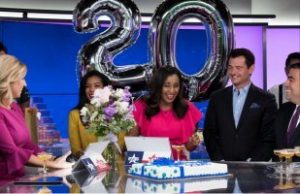 So the Austin, TX station laid it on extra thick for Quita Culpepper’s 20th anniversary in the newsroom.

During the Thursday 6 p.m. newscast, her co-workers surprised her with a highlights package, balloons and a cake.

Culpepper started out at the station behind the scenes, eventually landed a reporter position and is now the station’s prime-time co-anchor.