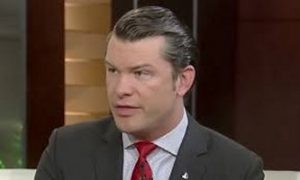 Pete Hegseth would dearly love to be a member of the Administration’s cabinet, but, for now, he’s willing to settle for being one of its staunchest supporter on the weekend edition of the kurvy kouch at “Fox & Friends.”

Even if he’s dead wrong.

His mistake was in having someone resembling an actually journalist sitting on the set – an atypical situation at “Fox & Friends.”

Ed Henry jumped in to set the record straight.
“You’ve read the numbers, I’m sure. Barack Obama created more jobs in his final 21 months than President [Donald] Trump has created in his first 21.”

Henry also uncharitably pointed out that the Trump Administration was handed a functioning economy as opposed to the train wreck facing Obama in 2008.

Hegseth’s reaction was to put his hands over his ears and repeatedly saying “Nope nope nope.”

Well, that’s not really what he said – but it was damned close.