That’s one reaction, coming from WDAF chief meteorologist Mike Thompson (right), just one of a trio of familiar faces at the Kansas City station taking buyouts from the Tribune station, as the way is paved for Nexstar to move in to a situation with a trimmed payroll.

Thompson’s last day will be December 21.

Thompson has been at WDAF for 26 years, and spent nine years at KCTV before that, where he was the chief meteorologist for part of that tenure. 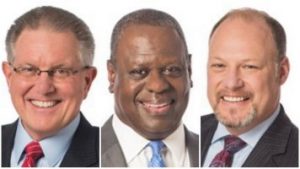 Also heading for the door is sports director Al Wallace (left), who departs on December 20 with his buyout package.

Wallace originally joined the station in 1985 after having worked in both Amarillo and Lubbock, Texas, and the former KVBC in Las Vegas.

Wallace has been a sports anchor and reporter for 38 years in all.

I’ve been in broadcasting now for 40 years, and after 33 years at this station, my last day to work at this station will be two weeks from tomorrow night. It’s been a blast, it’s also been a challenge and that’s what has brought me to the end of the road here at WDAF at the end of this month,” he said in announcing his departure.

And completing the Tribune trifecta, is sports reporter and anchor Jason Lamb (center), who will leave WDAF on December 31, having also accepted a buyout.

Lamb is the one member of the trio who isn’t close to retirement age so the resume is likely being polishe dup.