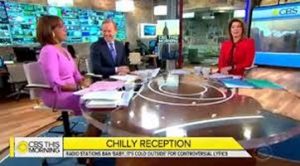 Gayle King can sometimes set our teeth on edge, but we have to admit she hit us where we live when she decided she couldn’t ignore the banning of a holiday standard.

King kinda lost it when the topic of the banning of the song “Baby, It’s Cold Outside” by number of radio stations across the country.

The song, written in 1944 by composer Frank Loesser (“Guys and Dolls”) as an amusing call-and-response duet for him and his wife to perform at parties – a common practice at the time – has suddenly become an ode to date rape among the #MeToo types.

The station had taken the song off the air, but has now decided to conduct an online poll asking listeners whether or not to put the song back on.

It appears most listeners want it back on. 90 percent, to be exact.

Count King as one of the 90 percent:

This kind of idiocy has driven some of us away from the toxic waste of terrestrial radio.

And really, if you’re dumb enough to want to monitor song lyrics for political incorrectness, try virtually any hit by Gary Puckett and the Union Gap – and their enduring fascination for underage girls.

Or Blue Oyster Cult’s “Don’t Fear the Reaper” which, in addition to featuring “more cowbell,” seems to be an endorsement of suicide.