Allan White of WCPO (ABC), the station’s first reporter who mentored the newsroom for decades died Saturday at the age of 94, according to his family. 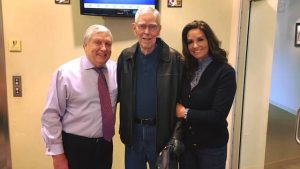 White worked for the Cincinnati Post and WCPO Radio, both owned by Scripps Howard, in the 1950s before being approached by Al Schottelkotte in 1959 with an offer to help create a TV news operation. He accepted and joined the four-person WCPO-TV news department.

“We started WCPO News from scratch,” White said years later. “Al was the news director and the newscaster.  I was the reporter and the staff.”

White covered some of the biggest events and newsmakers of the 20th century, including exclusive interviews with former President Harry Truman on the tarmac at Greater Cincinnati Airport in 1962 and Major League Baseball great Jackie Robinson in the seats at Riverfront Stadium during the 1972 World Series.

He transitioned to news and assignment editor before retiring from WCPO in 1989, but then he came back to archive some of WCPO’s early news footage,  preserving local history for future generations.

Visitation for White is this morning prior to a funeral Mass.