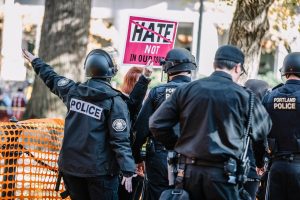 An email exchange from Nov. 14 obtained by WW via a public records request provides more insight into the terms of an offer by the mayor’s office to allow selected reporters to enter the police’s nerve center during the latest in a series of fraught protests.

The Portland Mercury first reported last month that a few reporters had been picked.

In the emails between the mayor’s communications director Eileen Park and a KGW reporter, Park offered exclusive access to the Portland Police Bureau’s Incident Command Post, or ICP, and asked the TV station to sign an agreement to allow the city to dictate what it would publish. Park offered similar access to hand-picked reporters from The Oregonian and the Portland Tribune.

Text messages between Park and the reporter show that KGW (NBC) declined the offer and refused to sign the NDA. The reporter called the NDA “unprecedented”.

Park stands by that aspect of the decision.

“I know that is not common for NDAs to be requested,” Park says, “but this is a very unique situation where confidential, highly sensitive information is being shared.”